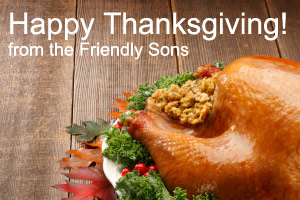 The turkeys were generously donated by the Friendly Sons of St. Patrick – Operation Turkey 2009, spearheaded by New Bedford’s Veteran’s Agent Donat “Dan” Le Blanc in collaboration with the Vietnam Veterans of America (VVA) Chapter 499, The Veterans Transition House and students of the Greater New Bedford Regional Vocational Technical High School provided over 350 Thanksgiving meals to area veterans and their families.

As the city’s Veteran’s Agent, Mr. Le Blanc provides information on benefits and administers the MGL Chapter 115 financial assistance fund for Veterans and their widows who live in New Bedford. He is fully aware of the need for this project. In 2002, he solicited the aid of the Vietnam Veterans of America Chapter 499 to deliver Thanksgiving meals to local veterans who, in turn, arranged for the meals to be cooked and prepared by the staff and residents of the Veterans Transition House.

The prepared turkey meat, accompanied by gallons of turkey gravy, was delivered to the Veterans Transition House where staff and residents prepared mashed potatoes, vegetables, and cranberry sauce. VTH staff person Gene McCoy, cooked additional turkeys and oversaw the preparation of the rest of the meals helped by Board of Directors Member and veteran Rick Brown. The overall operation at the VTH was under the direction of the VTH Program Director, Susan Fonteneau-Nicolan. All of whom are veterans of several Operation Turkeys.

The project started out in 2002 when volunteers in nine vehicles delivered thirty meals with one piece of pie to area veterans, widows of veterans, and their families. Today, over seventy-five volunteers from all ages and all walks of life joined the members of New Bedford’s Chapter 499 of the Vietnam Veterans of America in preparing and delivering twelve times that number of meals and each meal was accompanied by a full pie, stated Dan Le Blanc. These volunteers, too numerous to be named, included members of the U. S. Army, City officials, both active and retired members of the New Bedford Police Dept., the School Dept. and residents of New Bedford and surrounding towns.

Of note were youngsters Chloe and Kiley Liete who were accompanied by their dad, Russ. This family has participated in several Operation Turkeys and is sure to return next year.

Newcomers this year were Elaine Gizzi and brother Bill Golenski. Elaine said, “I have donated to veterans causes nationally in the past but I’d rather donate to a local organization such as the VTH.”