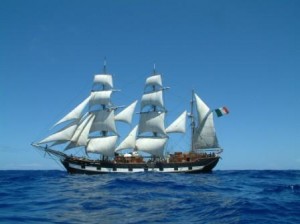 The second in the series of Irish-themed lectures at the Whaling Museum is scheduled for February 11 at 8 p.m. as part of AHA night – Don Cuddy,  a native of Dublin and a staff writer at the Standard-Times in New Bedford will be this month’s guest speaker.

Combining a love of the sea with a strong interest in history, particularly Irish history, Don joined the crew of the Irish Tall Ship ‘Jeanie Johnston’ in October 2003 for its return voyage to Ireland, departing from St. John’s, Newfoundland. The trip across the stormy North Atlantic took two weeks.

The replica of a Famine-era ship that made thirteen voyages to North America carrying emigrants fleeing ‘An Gorta Mor’ (The Great Hunger), the modern ‘Jeanie Johnston’ was built to commemorate the 150th anniversary of the famine which drove two million people from their homes.

Don’s lecture will include some background on the Famine and the ‘coffin ships’ upon which so many perished trying to reach the safety of the New World, as well as an account of his visit to Newfoundland and his own experience on the high seas aboard a square-rigged sailing ship.