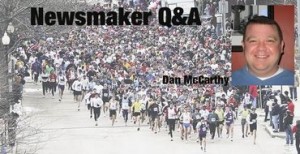 Dan McCarthy, 32, lives in New Bedford and works in financial services. But as one of the Friendly Sons of Saint Patrick, he is also co-chairman — along with Steve Beauregard — of the 2009 New Bedford Half Marathon race committee.

With the committee that organized the New Bedford Half Marathon calling it quits in 2008 after 31 years, and the race’s future uncertain, the Friendly Sons of St. Patrick stepped in to save the day.

Q: Why did the Friendly Sons decide to take over the half marathon?

A: We took over the race because we saw it as an opportunity to help us increase what we like to do in the community, which is spread our goodwill. With 31 years under its belt, it’s an event a lot of people care about.

Q: What will be new about the race this year?

A: We’re really trying to have local merchants and restaurants embrace the race as a true value-add to the New Bedford experience. With the Restaurant Run following the race it’s an opportunity for people who come downtown on race day to see a lot more than just a road race.

Q: So you’re really reaching out to the business community?

A: Correct. We were reaching out and we found an ideal partner in Eagle Industries. I think they are making a solid stand to be part of this community. They are a large employer in the South End of New Bedford and are proud of the work that they do. They were reaching out to get more involved also, and it just fit, hand-in-glove.

Q: How have you been preparing for the race?

A: We’ve tried to step it up with our marketing. We’ve sent teams of Friendly Sons to other races throughout New England to do literature drops, meet race directors and introduce ourselves into the running community, and we’re already seeing the benefit of that.

As of the last day of February we’re tracking an online registration rate of some 500 more runners than had pre-registered by March 1 last year. We hope to have as many as 2,600 runners.