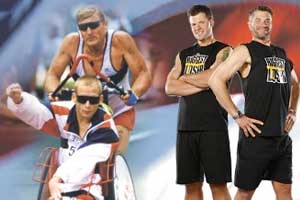 Runners and their supporters of this year’s New Bedford Half Marathon can expect some guest appearances from some national and local celebrities beginning with pre-registration at the YMCA on Saturday afternoon, the day before the March 15th race. Rick and Dick Hoyt of Team Hoyt and Biggest Loser celebrities Marc and Jay Kruger will be running the 13.1 mile race. They will also meet and greet runners and their families at pre-registration at the YMCA on Saturday afternoon. And, two-time Boston Marathon winner and current New Bedford Half Marathon record holder Geoff Smith will also be playing a role in the 32nd running of the Half Marathon.

Team Hoyt plans to be at the March 14th pre-registration, selling copies of their book, from 1:00 p.m. to 4:00 p.m. (Registration begins at 12 p.m.) Dick and Rick Hoyt are the father-and-son team that has been running every kind of road race, from 5K’s to Iron Man triathlons for over 25 years. Rick, a quadriplegic since birth, has been the inspiration of Team Hoyt as Dick pushes and pulls him in a specially-designed wheelchair in races around the country. Their message is one of inclusion of the disabled in every arena and the Hoyt Foundation raises money to educate the able-bodied about the challenges that the disabled face every day. They will be running the New Bedford Half Marathon in preparation for the Boston Marathon in April which, if all goes according to plan, will be their 1,000th road race.

Also on hand at pre-registration will be Marc and Jay Kruger, two local brothers who became famous last year when they competed on NBC’s reality competitive weight-loss program

“The Biggest Loser.” A year after their participation on the show, the Kruger brothers have continued their physical fitness regimens and are becoming familiar faces on the local race circuit. Thirty-six-year-old Marc Kruger lives in Dartmouth while 32-year-old Jay Kruger lives in New Bedford.

And, international running legend Geoff Smith has also agreed to participate on race day. Smith is expected to be available to talk to runners during the post-race award ceremonies at Carney Academy Elementary School. Smith is a two-time Boston Marathon winner and competed in the Olympics for Great Britain in 1980 and 1984.

This is the 32nd running of the New Bedford Half Marathon which is rated one of the top 25 half-marathons in the country by Runner’s World magazine. Organizers are expecting over 2,000 runners to participate in the race.

The New Bedford Half Marathon is hosted by The Friendly Sons of Saint Patrick. Presenting Sponsor is Eagle Industries.