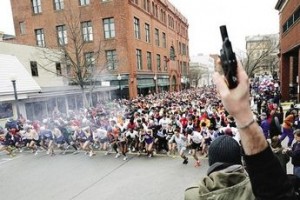 NEW BEDFORD — The future of the New Bedford Half Marathon, one of the city’s signature events, is now in the hands of the Friendly Sons of Saint Patrick. “We know we can do it,” Friendly Sons president Chris Donnelly said. “We have the people and we have the contacts. Now we will sit down with them to work out a strategy for next year. This race has been run so well for so long we felt it would be a shame just to let it go.”

The all-volunteer race committee — most of whom have been involved with the half marathon since its first year — announced in 2007 on the 30th anniversary of the race that they were seeking to pass the torch. When no one emerged to take over responsibility, the prospects for the race’s future seemed uncertain.

But after all they had invested in the event, committee members didn’t want to see the race die, so members returned in 2008 for one last time.

Staging the race, rated as one of the top five half marathons in the country by Runner’s World magazine, is a huge undertaking and has become almost a year-round activity for the small committee. It takes almost $50,000 to fund the event, with all of the funds coming from the $35 entry fee.

From prize money to publicity, T-shirts to paper cups, Porta-Johns to liability insurance, there are myriad costs associated with race organization. Last year it cost the committee $14,800 for the police detail alone. One hundred city police officers are required to patrol the course, a larger commitment of resources than that required for the Portuguese feast at Madeira Field. In spite of the difficulties, the race has not only survived but has continued to be profitable.

Its continued success has in large part been due to the efforts of the hundreds of volunteers who turn out year after year, to set up the course, process the entries, man the water stops and prepare the famous post-race meal: chowder and fish sandwiches.

“We’re very excited about this. We think it’s good for us and good for the city,” Steve Beauregard of the Friendly Sons said. “We met with the race committee on Monday night and 70 of our guys showed up. I think they were impressed by that.

“The race director, Jim Ryan, made a passionate presentation about what the race means to them. We believe that this is good for us and good for the city.”

The Friendly Sons became involved with the race for the first time this year when Sons’ members manned a water stop at the 10-mile mark on East Rodney French Boulevard, beside the Celtic cross memorial erected there by the Friendly Sons.

“I think that watching the race from that perspective convinced them that this decision would be to their advantage,” said Dave Branco, one of the key organizers from the outgoing committee.

Branco said his committee felt confident they are leaving the event in good hands.

“They have a good organization with more than 300 members and they want to do what’s best for the city,” he said. “They have the support of the mayor and the City Council and what impressed us the most was that they have that youth and energy that the race needs.”

Mayor Scott W. Lang said he was pleased with the decision that ensures that the city continues to host the event.

“The half marathon is one of the premiere half marathons in the nation. We’re very excited about the Friendly Sons partnership with the outgoing race committee and I am confident in their ability to continue the New Bedford Half Marathon tradition — a top notch race that attracts accomplished athletes from across the country and globe,” he said.

The 2009 race will be very similar to previous years, Donnelly said.

Members of the current committee “are going to be with us next year in an advisory capacity,” he said. “We want to pick their brains and find out how it works. After that we may look to add to the race in some ways. We’d like to attract a major sponsor and since we’re Irish and it’s in March, maybe we will develop an Irish theme, get some Irish runners from Providence College. We’d like to promote downtown also and perhaps get a big tent for a party afterwards. But we’re not looking to make money from this. All of the proceeds will go towards our endowment.”

With major sponsors in the 1980s such as Bank Of Boston offering significant prize money, the half marathon once attracted elite runners every year such as Ingrid Kristiansen of Norway who set a world record here in 1989.

Even without sponsorship the race’s popularity has endured and it continues to attract close to 2,000 runners every year.

This story first appeared on the Standard Times website at:
http://www.southcoasttoday.com/apps/pbcs.dll/article?AID=/20080711/SPORTS/807110354