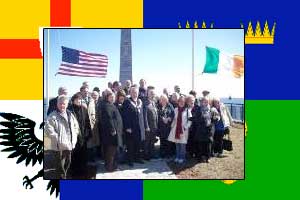 Buncrana Mayor Paul Bradley, who took part in an historic cross-border trade delegation to New Bedford, Massachusetts on St Patrick’s weekend, says the trip was “an education to us all” and a great success. Firstly, he explained the many similarities between New Bedford and Derry/Buncrana.

New Bedford is a large coastal fishing port, with a population very similar to that of Derry, around 120,000. The city was also traditionally very dependent on clothing manufacturing but, just as we’ve experienced with Fruit of the Loom, that industry is now moving overseas. There are also strong Irish cultural links, in fact the trip as partly funded by the Friendly Sons of St. Patrick in New Bedford.

The invitation to New Bedford followed on the visit to Derry and Buncrana by a delegation from there last August, during which time Derry City Council were able to showcase the Maiden City, while Buncrana Town Council highlighted the best of the seaside town and the surrounding Inishowen peninsula.

The trip to New Bedford was particularly significant in a number of ways.

The main co-ordinator of the trip in New Bedford was Chris Donnelly originally from Derry. He grew up on the same street as Pat Ramsey but has been living in America for many years. Mayor Bradley says he pulled out all the stops. “Fair play to Chris he put together a very tight, demanding but enjoyable schedule.”

One of the first visits was to the world’s largest golfball manufacturing plant owned by Titleist. At that particular meeting it was suggested that the company might consider sponsoring a golf championship in the north west since we have ten golf courses within ten miles of one another. Mayor Bradley says the case was well put and well received.

Next visit was off to Providence, Rhode Island to meet the Mayor David Cicilline and the Governor Donald Carcieri at City Hall. “Here we got a chance to discuss the subject of the undocumented Irish, people who are in the US, paying their taxes and contributing to the economy but can’t come home for fear they will be unable to return.The request was made that the administration of Rhode Island would support any move by the Irish government and the American government to alleviate the situation.”

The delegation were also invited to the House of Representatives in Rhode Island, where they the Speaker of the House William J. Murphy. Both mayors addressed the House of Representatives and thanked the American Administration for their help in the negotiations for peace in Northern Ireland. Specifically mentioned were George Mitchell and former President Bill Clinton. “This to me was another truly historic occasion,” Mayor Bradley notes.

The group spent a day visiting schools with a view to forging links through education and possibly undertaking an exchange programme. At Normandine School in New Bedford – a ‘middle school’, for 10-14 year olds,w ith about 1,200 pupils, there was a very strong interest in an exchange programme.

Then on to the Greater New Bedford Vocational Technical High School, a huge Vocational school with 2,500 students and an annual budget of $30 million.

“Yes,” Mayor Bradley emphasises, “$30m – and we think we are investing in our education system! This was an education to all of us. Every hands-on programme is provided for in this school including courses like arts and communication, fashion, media, construction, architecture, carpentry, science engineering, legal studies and motor mechanics. The staff have a great pride in their school, which was very evident, and it was pointed out that 65% of the teaching staff are former pupils.”

The delegation were also hugely impressed with their tour of New Bedford’s fishing port.

“This is the number one fishing port in the USA and services about 500 fishing vessels. Interestingly for us the port is classed as a Foreign Trade Zone, which provides duty-free manufacturing opportunities for importers and exporters.This is something that we in Ireland can learn from, particularly in the north west region. With government support, EU agreement and help this model can be copied.

” We also had a visit to a Marine Technology Centre, called SeaMAST. This was extreemley interesting. The centre is exactly what Buncrana Town Council wanted investment for when we put forward the idea of a Coastal Zone Management Centre or Seaworld. I see that this is back on the agenda just recently. The ideal place to look at is in New Bedford.Their marine research is attached to the University of Massachusetts. One point they emphasised, which I believe is critical was: ‘There are challenges facing the fishing industry and our ability to offer pragmatic management strategies that would guarantee the economic sustainability of our fisheries. The institute will foster cooperative working relations among fishermen, scientists and managers to help develop scientifically based managenent approches to protect our resources and our people in the industry” This strategic objective can easily be applied to Lough Swilly and Foyle.

“The harbour area features a hurricane barrier that has a 150-foot opening which closes during hurricane conditions and coastal storms making the harbour one of the safest on the eastern seaboard. Buncrana is looking to build a mini version of this at our harbour. We want to build a breakwater at both sides of the pier. Money has been allocated but the council cannot get the Dept of Marine and the Dept of Finance to agree a wording for a Foreshore Lease to allow the work to start. In our country we have bureaucracy gone mad.”

In New Bedford the delegation also went to City Hall and met with the Mayor Scott Lang and City Councillors. “This was another chance for us to sell the North West region. At these meetings the historical nature of the trip was expanded upon. I personally want to thank Pat Ramsey and Mayor Drew Thomson for their courage and commitment and for including Buncrana Town Council in the deputation.”

“This was a true celebration of Irishness. The speeches by Pat Ramsey, Mayor Drew Thomson and myself gave us another chance to highlight the importance of the trip, to thank the American Administration and say a few words about the undocumented Irish. A truly great night was had by all.

“Sunday was another highlight. All hands put on our shamrocks and our greenery and headed to Boston for the St. Patrick’s Day Parade. What a day! Suffice to say it has gone down as one of those special days that you remember for the rest of your life.

Before leaving for Ireland, the delegation had two final engagements the next morning. First, they were given an official reception by Mayor Scott Lang at City Hall, also attended by members of the Friendly Sons of St Patrick.

Next, they took part in a special wreath-laying ceremony at a memorial monument erected by the Friendly Sons in remembrance of all Irish emigrants.There were three wreaths laid -one by Mayor Scott Lang on behalf New Bedford, one by Mayor Drew Thomson on behalf of Derry, Northern Ireland and one by Mayor Paul Bradley on behalf of Buncrana.

Mayor Bradley says the Friendly Sons of St. Patrick of New Bedford deserve the highest praise for putting the whole thing together. They are a non-profit organisation dedicated to increasing the awareness of the cultural achievements of the Irish both past and present. “We have made many friends on this journey which is really only beginning. I look forward to continuing the links with New Bedford. Last but not least I want to thank Sean Toomey the President of the Friendly Sons and his committee along with Chris Donnelly, for bringing whole thing about.”