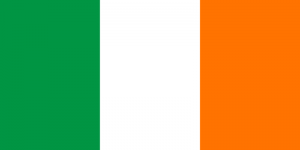 The national flag of Ireland (Irish: bratach na hÉireann / suaitheantas na hÉireann) is a vertical tricolor of green (at the hoist), white, and orange.  It is also known as the Irish tricolour. The flag proportion is 1:2 (length twice the width). Officially the flag has no meaning in the Irish Constitution, but a common interpretation is that the green represents the Irish nationalist tradition of Ireland and the orange represents the Orange tradition in Ireland, with white representing peace between them. The white in the center would thus signify a lasting truce between the ‘Green’ and the ‘Orange’.

Presented as a gift in 1848 to Thomas Francis Meagher from a small group of French women sympathetic to the Irish cause, it was not until the Easter Rising of 1916, when it was raised above the General Post Office in Dublin, that the tricolor came to be regarded as the national flag. Meagher was the son of Newfoundland-born mayor of Waterford, Thomas Meagher Jr, however there are two theories on his inspiration for the flag; the similarly-colored Newfoundland Tricolor credited in legend as having been created in 1843, though this seems unlikely given the actual known history surrounding the Newfoundland Tricolor, and the French Tricolor.

The flag was adopted in 1919 by the Irish Republic during its war of independence, and subsequently by the Irish Free State (1922–1937), later being given constitutional status under the 1937 Constitution of Ireland. The tricolor is regarded by many nationalists as the national flag of the whole island of Ireland. Thus it is flown (often controversially) by many nationalists in Northern Ireland as well as by the Gaelic Athletic Association.

It is similar to the Flag of Côte d’Ivoire, but that flag is shorter and the colors are reversed… (could someone tell White’s of Westport?)

Irish tricolor is sometimes “misrepresented” with gold instead of orange 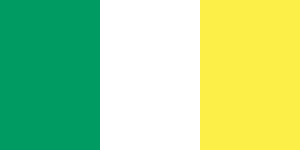 Occasionally, differing shades of yellow, instead of orange, are seen at civilian functions. However the Department of the Taoiseach state that this is a misrepresentation which “should be actively discouraged”, and that worn-out flags should be replaced. In songs and poems, the colors are sometimes enumerated as “green, white and gold” in song, using poetic license.