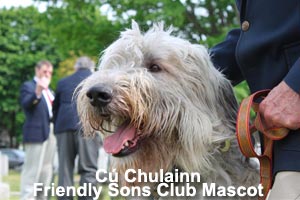 The Irish wolfhound is a breed of domestic dog (Canis lupus familiaris), specifically a sighthound. The name originates from its purpose (wolf hunting) rather than from its appearance. Irish Wolfhounds are the tallest dog breed on average. Built like a very muscular greyhound, the Irish wolfhound male can attain the stature of a small pony. Its large, long head tapers to a medium point and is held high. Ears are small and stay close to the head except during moments of intensity. Strong shoulders, a muscular neck, a deep chest and a retracted abdomen give the dog its characteristic body shape. Paws are large and round. The tail is carried between the legs, curving slightly upward. The coat is rough, shaggy, wiry and especially bushy over the eyes and under the jaw.

The Irish Wolfhound is graceful with an easy yet powerful gait. Historically these dogs had to possess not only speed, but also endurance, allowing them to follow their prey and hunt it down. They had to be hearty enough to withstand being injured whilst using their own brute force to bring the prey down. The modern representation of the breed appears to be a dog capable of doing just that. Generally breeders aim for a height range of 85 to 95 centimeters (34 to 38 inches) at the withers in males, 50 to 80 centimeters (30 to 35 inches) for females. Generally acceptable weight 46–70 kg (101–154 lbs). The recognized colors are gray, brindle, red, black, pure white, fawn or any other color that appears in the Deerhound. 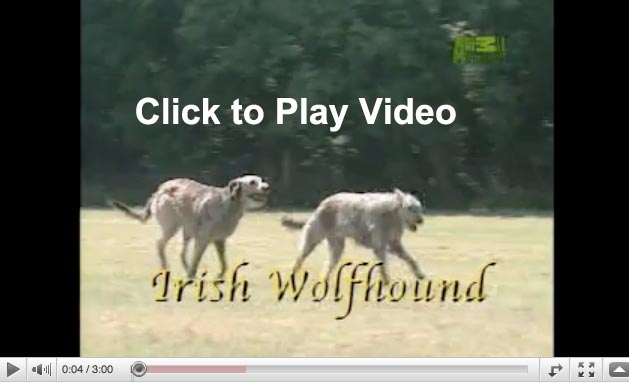