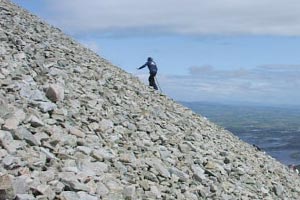 Donegal man Joseph McElwee, 38, was outside a pub when he called an on-duty garda a “Mayo Wanxxx” and told him to “Fxxx off home to Mayo”. Garda Nicholas Freyne told the court the abuse continued for 10 minutes. McElwee was charged at Milford District Court with threatening, abusive or insulting behaviour, intoxication, disorderly conduct, wilful obstruction and failing to comply with the direction of a garda.

Judge Seamus Hughes told McElwee he was to do the four stations of the famous Mayo pilgrimage as a mark of respect for his fellow Irish people, especially those in the line of duty.

“I want you to come back in a month’s time with evidence that you did the four stations of Croagh Patrick and say a few prayers. You then might have a different impression of Co Mayo and its people.”

Read the complete (and uncensored) article in the Irish Examiner – HERE

This from Wikipedia: Croagh Patrick has been a site of pilgrimage, especially at the summer solstice, since before the arrival of Celtic Christianity. Saint Patrick reputedly fasted on the summit of Croagh Patrick for forty days in the fifth century and built a church there. It is said that at the end of Patrick’s 40-day fast, he threw a silver bell down the side of the mountain, knocking the she-demon Corra from the sky and banishing all the snakes from Ireland.

While barefoot trekking is now discouraged, many Reek Sunday participants climb Croagh Patrick barefoot (and, among men, sometimes shirtless). Hypothermia  is a concern for many climbers, especially if the weather is bad. As a result, the trip can be dangerous at times for many of the climbers and, while deaths are infrequent, there have been recorded incidents where people have been badly injured during the climb because of the steep slope and bad footing.