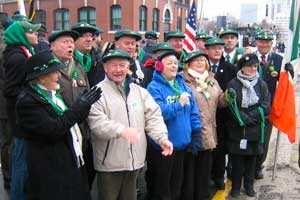 With St. Patrick’s Day right around the corner, one would expect our local Friendly Sons of St. Patrick to throw open the doors for a true Irish celebration.  For sixty-seven years, the Friendly Sons have done just that with their annual dinner-dance as their way of celebrating the Feast of St. Patrick.

The Friendly Sons dinner dance will take place on Saturday, March 15, 2008 at Whites of Westport.

When the organization brought Nobel Laureate John Hume into the City in 2005, it was certainly a stunning and magnificent occasion.  This years invited guests certainly rival Mr. Hume’s visit to New Bedford.  Joining them from Ireland will be Mayor of Derry, Drew Thompson and his partner, Mayoress Linda Watson as well as the Mayor of Buncranna, Paul Bradley and his wife Mary.

Mayor Thompson is a Protestant Mayor from the City of Derry in Northern Ireland representing the Democratic Unionist (DUP) party.  Mayor Bradley is a Catholic Mayor from the City of Buncranna in the Republic of Ireland representing the Fine Gael Party.  Only a few short years ago, a DUP member from the Northern Ireland would never think to go on a delegation with politicians from the Republic of Ireland.  For the Friendly Sons, this year is just not an opportunity to celebrate the Feast of St. Patrick, but an opportunity to celebrate peace in all of Ireland.   As an on going part of the peace process, this is major political history to have the makeup of this delegation coming to New Bedford.

Along with these two Mayors, the City will enjoy the company of the former Mayor of Derry and current Assembly Member and SDLP leader Pat Ramsey and his wife Chris.

Besides the honored guests from Ireland, the Friendly Sons will be bestowing there 2008 Person of the Year Award to retired New Bedford Police Captain Richard M. Spirlet and the organizations Service and Achievement Award to Richard Lally, Jr.

The Friendly Sons annual dinner dance will take place on Saturday, March 15, 2008 at Whites of Westport.  Tickets are $25.00 per person and anyone interested in attending may contact Mr. Paul Swain at 508-992-9473.

Elected Mayor of Buncrana June, 2007 Paul had been a councilor for 8 years representing the Fine Gael Party on Buncrana Town Council.  Married to Mary with 3 children, 1 girl Ria and 2 boys Dylan and Aaron. Paul owns and runs a local supermarket known as Bradley’s EUROSPAR with approximately 30 employees.  He is a graduate of University College Dublin, Bachelor of Commerce and was a company Director of a local shirt manufacturing company for 20 years.

Alderman Drew Thompson, Democratic Unionist Party (DUP), was elected to Derry City Council following the Local Government Elections in 2005.  He served as Deputy Mayor in 2006/7 and was elected Mayor at the Council’s Annual Meeting on 4th June, 2007 for a one year term.  As Mayor, he is an ex officio member of the Council’s Standing Committees and chairs the Civic Regeneration Forum, the City’s Visitor and Convention Bureau and is a member of the Honorable Irish Society Advisory Committee.  Alderman Thompson is a member of various Committees/Bodies including the Community Safety Partnership and the Local Strategy Partnership.

He has been actively involved in community work for many years and, up until his election as Mayor, was employed as Manager of Waterside Area Partnership.  He is also Chairperson of the Caw/Nelson Drive Action Group.

Pat Ramsey is 49 years old and married to Chris with four children.  Pat was elected to Northern Ireland Assembly in November 2003 and was appointed SDLP spokesperson on Culture, Arts and Leisure.  Pat has served as member of Derry City Council for 19 years.  He was elected as Mayor of Derry 1999-2000 and distinguished himself working vigorously and passionately for all the people of the City.

Pat has been involved in community work for 20 years. He was a founding member of the Shared City and District Initiative, set up to target marginalized Protestant communities and interest groups in the Waterside area. He established the successful Pride in Our City campaign, introduced the Junior Mayor idea to Council and initiated the setting up of a Shadow Youth Council.  He also founded Foyle Haven a drop in centre for Alcoholics.

With a background in youth work and a solid record of constituency service, his particular interests are social justice, the environment, economic rejuvenation and educational development.

Pat is currently the Chair and Leader of the SDLP Group of Councilors in Derry City Council.

Sean Carr is 49 years old and married to Marie with three children Shauna, Catherine, and James.

Sean was elected to Derry City Council in June 2001 and was re-elected for his second term in council in May 2005.

During his first term of Council he was elected Chairperson of the highly distinguished committee Recreation and Leisure for two years.  He is currently on a review board to undertake the rejuvenation of all Cultural and Leisure Services for the North West Region of the Northern Ireland province.  He has been elected onto the District Policing Partnership were he is working to integrate the PSNI (Police Service of Northern Ireland) into local communities and to make them more accountable.

He is currently the managing director of his own family run business, a licensed Funeral and Embalming Service.

With a background in Sports and Leisure he is currently involved in the senior professional football team.  He is also firmly known for his strong community led work, were he has been tirelessly working for the provisions of children’s play areas.

Peter McLaughlin, Deputy Mayor:  Paul was born in Buncrana in the early 60’s at his family home on Main street and is the sixth of a family of eleven.  He went to school locally, St Columbas boys school (primary), the Convent of Mercy (secondary) and Buncrana Technician College.   Paul trained as a dental technician and became a registered dental technician in 1984.  In 1990, as is father became ill, he went back to work in the family business which he still works at today.  Politics has been in my family since his grandfather’s time and when his father passed away in 1991, Paul was co-opted onto the Buncrana town council.  Paul has been honored to be re-elected to the town council since to serve the people of Buncrana.

He married and moved to Derry city in 1984 and while there began to understand more about the issues that affected the city and how the same issues affect the country of Ireland.   Paul has been on several committees including the North West Tourism serving as a director of Board Failte.

Junior and Anna have been married for 47 years and they have 6 children.  He is a very active member of the SDLP working very hard behind the scenes for the Party.  He was elected as Chair of the District Executive and is currently the Vice Chair of the Bogside Branch.  Stood locally for Council elections

Now retired Junior comes from an Engineering background with 50 years experience as a Tool and Dye Fitter.  He worked locally for a number of years for Dupont before going to work overseas for an American Oil Company in Saudi Arabia.

For many years he was involved locally with the Cub Scouts and was the Assistant District Commissioner for the Catholic Boys Scouts Ireland.

Anna has been married to Junior for 47 years and they have 6 children.

Anna has a background in the shirt making industry Anna was actively involved in the Unions during the 1950’s.  Like her husband Anna is a very active member of the SDLP working tirelessly behind the scenes.  Her elected positions within the Party include Chair of the Bogside Branch and Treasurer of the District Executive.

Carita had  the great honor along with her husband John, who was Mayor of the city at the time,of welcoming President and Mrs. Clinton to Derry in October 1995—–“a great day for Derry when the people took the Clintons to their hearts!”  Carita is a classically-trained singer, and has performed in opera and musicals in Ireland and England.  Her greatest role was Carmen in Bizet’s famous opera.

Carita was soloist in Drogheda during Pope John Paul’s visit to Ireland in 1979. Her  professional career was as a teacher of children with special needs and is qualified to teach speech and drama to all age groups.  Carita has produced and directed plays, musicals and pantomimes in Derry and elsewhere.  At the moment she is busy rehearsing a new play set in Donegal based on a true story.

Carita has a family of three, two boys and one girl of whom she is very proud. She now spends as much time as possible with her beloved grandchildren ,Evie-Jane, Charlie, Catherine and Rebecca.